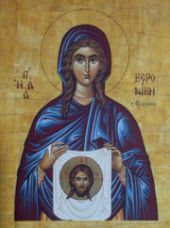 Last Wednesday, July 25th, was the feast of my St. Veronica, Orthodox Old Calendar. There is no official service for her and our abbot was asking me what I normally use for her? After some discussion, and many years of procrastination, I received a blessing to compose a service for her! Below is what was used for Vespers. She was quite a woman and her story follows the service. I felt goose bumps as the monks were singing her praises. It was for me the first time I really felt the joy of her feast – for we had words to sing. Glory to God!

Stichera for Lord I have cried…

By humbly and courageously touching the hem of Christ’s garment with faith/ Holy Mother Veronica/ your issue of blood of twelve years was healed by the Master/ who then endowed you with the gift of healing/ and as rivers of spiritual waters overflowing their banks// you water those sick and suffering, with the healing grace of God.

Your name means true image, /for with true compassion, you used your veil to gently wipe Christ’s face as he carried His Cross./ His image remained on your veil,/ and you carried His wonderworking icon and the gospel to those in need./ Holy Mother Veronica, //teach us to seek healing through the One True God and Savior of our souls.

Who would not wonder at and glorify faithfully the unseen miracles of humble Veronica? O the wonder and glory of God given grace! / Teach us by thy example/ to turn with faith to God for the healing of our souls and bodies.

Your holy feast has become a bright heaven of salvation, / O Holy Mother Veronica, / that shines like the sun with the action of divine healings;/ your miracles of salvation shine like stars.// Teach us to pray with faith to Christ for the healing of our souls and bodies.

The image of God was preserved in you Holy Mother Veronica,

For taking up your cross you followed after Christ.

Teaching us to disregard the flesh for it passes away,

but rather to nurture the soul, for it is immortal.

Therefore, your spirit is rejoicing with the Angels Oh Holy Mother Veronica

St. Veronica is identified with a hemorrhaging woman in the New Testament Gospel of Matthew (19.20), which reads: “And behold, a woman which was diseased with an issue of blood twelve years came behind him and touched the hem of his garment, for she said within herself, `If I may touch hip garment I shall be made whole.’ But Jesus . . . when he saw her said, ‘Daughter, be of good comfort, thy faith hath made thee whole.” It is known from the Gospel that Veronica was not only a real person but one who was aging and who was but one of many healed by the Savior. Thereafter, she is said to have had a statue of Christ, arms extended to comfort the world, erected and placed in front of her home as a token of her gratitude and reverence.

St. Veronica, whose name is a compound of the two words “Vera” and “Icon” which means true image was a pious woman of God. On the first Good Friday, St. Veronica was the woman who stepped out of the crowd and wiped the perspiring face of Christ as he struggled to carry the Cross on the road to Calvary. The cloth she used miraculously retained an imprint of the countenance of the suffering Messiah.

Veronica’s veil, which is now the precious property of the Roman Catholic Church, has been placed in a hallowed corner of St. Peter’s Basilica in Rome, where it is put on display the second Sunday after Epiphany, the four days of Holy Week, Easter Sunday, the Monday after Easter, Monday of Pentecost, February 22, May 3, and November 18 of each year, as well as on other special occasions.

St. Veronica married a Christian convert named Zacchaios who joined her in all of her religious efforts, which were considerable and included missionary work, during which time she held tight to her precious veil. She was called to the side of the ailing Emperor Tiberius, whose physicians had given up hope, but at the mere sight of the veil which Veronica held forth, who was cured of his malady. Together with her converted husband, Veronica undertook to carry the message of Christ to remote areas, concentrating on what is now the south of France.

I am a native San Franciscan currently living in Sacramento, CA. Due to health issues in my early 20s, I began a spiritual journey in quest of inner peace and healing. I felt my soul and body were connected and if my soul could heal, perhaps so could my body. I was a lapsed Catholic who studied Eastern religions. I had a guru and Tibetan lama, practiced prayer and fasting, and meditation techniques. I studied metaphysics, channeling and the life of the soul, which I later taught to others. Yet, after twenty-five years of seeking within the New Age and Eastern religions, I was left depressed and spiritually unfulfilled. Thanks to my late husband and the grace of God, my spiritual journey ultimately allowed me to convert to back to Christianity, find God and open my heart newly to Jesus Christ through the study of ancient Christianity in the Eastern Orthodox Church. I am the author of two published books, The Pearl of Great Price and In Christ I am a New Creation, Part I. I am currently working on my third book, A Leap of Faith, and a book about my saint, St. Veronica, my other guardian angel. St. Veronica is the woman with the issue of blood, whom the Lord healed (Matt. 9:20). In 2018, I will be publishing a book about St. Veronica including an Orthodox liturgical service to her. I am passionate about: Eastern Orthodox Christianity (Orthodoxy) since my Christian conversion in 1996. My relationship with Jesus Christ Striving to live in the world, but not be of the world Talking about spiritual warfare - there is an unseen battle being fought for the salvation of our souls Helping others come to peace with the Church and God Connecting with other Orthodox Christians about their spiritual experiences Living a full life while dealing with chronic health issues My dogs and gardening My saint, St. Veronica View all posts by pearlofgreatpricebook

2 thoughts on “The Woman with an issue of blood that Christ cured, St. Veronica”

Teachings of the Holy Fathers of the Orthodox Church, Podcasts and Personal Sharings

Buy "In Christ I am a New Creation"

Buy "The Pearl of Great Price"